Update [October 1st, 2019): The California State Department of Education has issued a letter revoking authorization for the opening of the Promise Academy Charter School. The red flags indicated below were known at the time of the granting of the charter. For news coverage of the charter school’s failure to open, see here.  The school’s website does not include any communication to parents, evidence of closure, or updates reflecting current information or final audits. 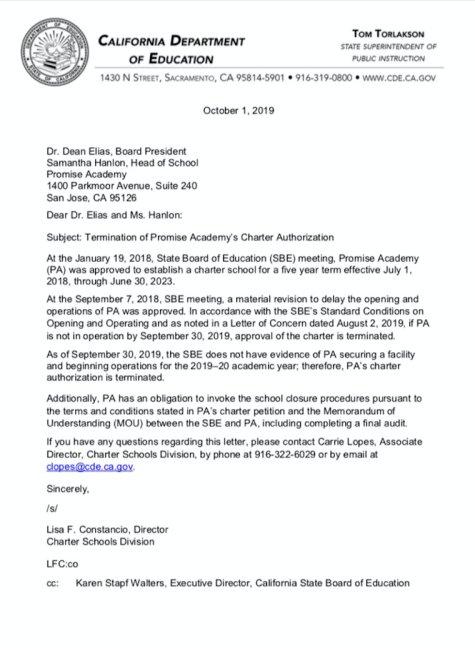 [Update 1/21/18]:
The charter schools described below were approved by the California State Board of Education on January 19th, 2018 despite community opposition and district/county denials documenting serious red flags in their petitions. Perseverance Prep was approved in full, and Promise Academy as a K-8. This is not the first time such flags have been overlooked with state level votes.  Analyses by In The Public Interest suggest a troubling track record of problematic approvals that have led (predictably) to closures.

For more on the financial roots of “Silicon Schools Fund” and “Innovate Schools,” both of which have heavily funded and promoted Perseverance, Promise, and other local charter chains, see this Walton keyword subset of posts from a larger collection documenting the harms of charter expansions. Consider also forwarding on to friends in San Francisco, where Innovate’s recruitment attempts have been ramping up recently and have been revealed here, here, here, and here. See additional links below.

In May of 2017, the Center for Popular Democracy published a report entitled “Charter School Vulnerabilities to Waste, Fraud, and Abuse.”  As we look to the California State Board of Education meeting on January 19th, it’s worth tuning in to how petitions from two controversial charter schools in San Jose will be voted on by State Board of Education Trustees. Will local decisions for denial be respected and upheld, or will we see another state override to push problematic charters with red flags that have already been identified?

In 2016, local, state, and national leaders of the NAACP issued a resolution calling for a moratorium on charter expansions, highlighting mounting concerns about high rates of school closures, fraud, corruption, and mismanagement in the charter sector and documenting extensive harms that have resulted, especially in communities of color that have been hit with unchecked charter growth.  The moratorium resolution is backed by the Movement for Black Lives and the Journey for Justice Alliance (which include dozens of civil rights, education, community, and youth organizations that have been impacted by the fallout of privatization policies).  In the Public Interest has also published written reports documenting failures in California’s policy planning with charter expansions. And scholars studying patterns of charter school growth compare many aspects of the charter authorization processes with the parallel lack of regulation and oversight in the sub-prime mortgage industry.

According to reviews and decisions made by San Jose District and Santa Clara County school boards, “Perseverance Preparatory” and “Promise Academy” were found to be deficient in multiple requirements and would not provide quality education to students. Documents provided by the district’s legal team and an external charter review find that Perseverance Preparatory:

A further detailed analysis of the Perseverance petition reveals a lack of appropriate programs for Special Education and English Language Learners, a founder with no administrative qualifications and only three years of classroom teaching, problematic discipline policies with psychologically punitive elements, and a curriculum involving heavy use of untested software programs (see student feedback on iXL as an example of one of many un-vetted programs). The petition reveals unclear policies for teacher recruitment, sexual abuse reporting, and restorative justice, and lack of cultural competency for low income and immigrant families and families of color.

According to the California Charter Schools Association, “anyone can start a charter school.” The founder of a proposed charter school need not have teaching nor leadership experience, and apparently does not need to have any background (at all) in education. If a founding leader is unfamiliar with education terminology, a simple google search for an acronym may yield the first search result that can be copied and pasted into a petition as if it were referring to an educational strategy that were more deeply understood.  This appears to have happened in the petition for Perseverance under the section titled “Identifying, Serving, and Assessing English Language Learners” where “SIOP” strategies were referenced (p. 57).

The SIOP acronym widely known in the education community actually refers to Sheltered Instruction Observation Protocol  yet was indicated to stand for the “Society for Industrial and Organizational Psychology” in the Perseverance petition.

Q. Will any State Board members ask the founding CEO to explain why the Society for Industrial and Organization Psychology was referenced as a contributor to the school’s program when that organization has not developed any literacy strategies at all for English Language Learners?  Since it is written into the petition, what aspects of the Society for Industrial and Organizational Psychology’s strategies will be enacted to specifically address the needs of English Language Learners?

Promise Academy is a different case altogether, albeit with intriguing parallels.  While qualifications are not an issue for Promise Academy’s founding CEO, Dr. Anthony Johnson, it is unclear what his role will be in the proposed new chain of charter schools.  Promise Academy currently has two open positions posted on their website. One is for a “Co-founder / Head of School” and another is for a “Founding Lead Teacher.”

Here are some questions to consider:

1. Will Dr. Johnson (listed as the Lead Petitioner) not be the founding principal of the school since there is a position opening posted for the role?  How can the public be assured of a qualified principal to lead this first campus when the actual principal’s position is yet to be filled? What is the proposed plan of action if the school cannot fill these (still) open positions with qualified candidates?

2. Why do such stark inconsistencies exist in statements provided in the petition when compared with those made publicly on Promise Academy’s website?

Here is a statement from the “fact sheet” on PA’s website: “Does Promise Academy require students to take 6 AP classes? No. Several opponents claimed this at the public hearing, but this is not true. We will offer students access to both AP and college classes with the expectation that all students will participate in college-preparatory coursework while at Promise Academy.”

The actual petition includes clear language indicating “Promise Graduation Requirements” in Figures P and Q (pages 82 and 83 of the petition), both of which specify 6 distinct AP classes and “Acceptance to at least one 4 year university” as conditions for graduation.

3. Why do both Perseverance and Promise Academy propose heavy “blended” and “personalized learning” software programs in their curricula when numerous reports document serious problems with the use of untested software and digital programs for learning?  The NAACP Task Force Hearing in New Orleans included students from charter schools speaking out about how they were “‘forced’ onto digital learning systems“.  A local tech-heavy charter chain (with many campuses marketed widely by the same non-profit “Innovate” that is pushing Promise Academy), has had serious concerns raised about practices that remain unresolved.  While some may argue that nearly all schools are moving in the direction of adopting online curricula, research suggests this to be an unwise direction. A recent report entitled “Asleep At The Switch” by the National Education Policy Center reveals that in addition to problems with content and student engagement, the lack of privacy protections in many software programs put students’ and families’ privacy at risk.

Promise Academy plans to use the highly controversial “Summit Basecamp” program developed by Facebook (see Parent Coalition for Student Privacy update here) that has now been shut down in districts across several states in areas with strong parent engagement and resistance. When schools are under public governance, there is at least a chance that parents’ voices would be heard and could impact change (see Teach-To-One “trainwreck” in Mountain View halted by parent opposition, an ACLU exposé on the exploitative practices of a software program targeting low income students in Detroit, and problems (and discontinuation) of the EdGenuity program described by a parent calling out attempts to silence her critiques). What protections would be in place for parents to demand changes in their schools’ policies when public governance is transferred to privately managed firms? For an overview of additional concerns related to the disenfranchisement of communities of color under policies pushing privatization, see A Perfect Storm: Disenfranchised Communities.

4. Finally, physical fitness, health, and a robust physical education program are vital to healthy youth development. Promise Academy’s petition is deficient in this area. The Campaign for Educational Equity at Teachers College, Columbia University documents the need for greater attention to health disparities when addressing educational disparities. To propose a charter school that disproportionately recruits youth from low-income communities who are already subject to greater health disparities given resource gaps, and then to further deny them high quality physical education may be argued to be a form of systemic racism.  While lack of attention to this critically important aspect of development is likely not intentional, it is poised to exacerbate health disparities.

The majority vote of the presiding Charter School Advisory Committee Members in December was 3-2 in favor of denial. Though not enough (5 needed) to make a formal recommendation, it is an indication that this particular red flag has been seen and heard by at least some at the state level.

Now, what remains to be seen is how the Trustees of the State Board of Education will be listening.

In the Public Interest has recently compiled an update documenting the Troubling Track Record of the State Board of Education in its past approvals of charter schools.

Will the board ignore the repeated red flags in the Perseverance and Promise charter school petitions when they make their final vote?

Or will they choose a different path?

To view the archived webcast of the meeting, click here.

Urban School Reform Is Really About Land Development, Not Kids

Privatized Education Steals From the Poor, Gives to the Rich

How Hedge Funds Will Profit From School Privatization