For ease of access, both sets of recommendations are provided in this post.
American Academy of Pediatrics Issues New Recommendations for Children’s Media Use

“Healthy Digital Media Use Habits for Babies, Toddlers & Preschoolers
Media in all forms, including TV, computers, and smartphones can affect how children feel, learn, think, and behave. However, parents (you) are still the most important influence.

The American Academy of Pediatrics (AAP) encourages you to help your children develop healthy media use habits early on. Read on to learn more.”… 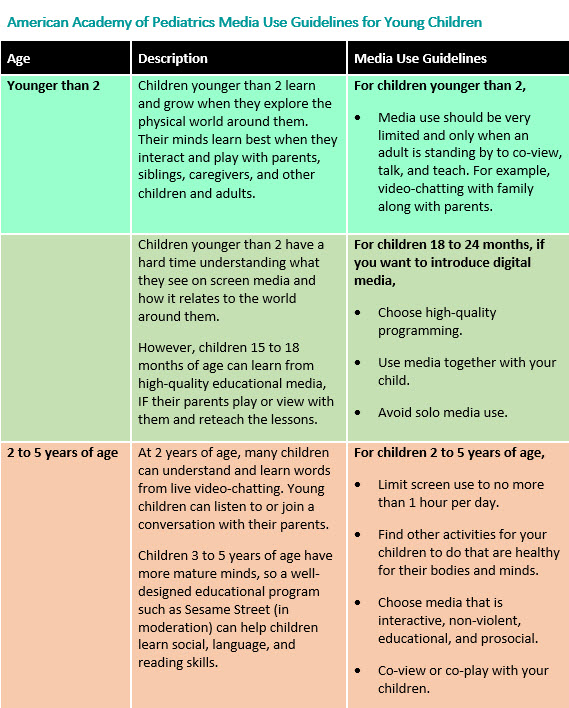 “What About Apps and Digital Books?
Most apps advertised as “educational” aren’t proven to be effective and they don’t encourage co-viewing or co-play that help young children learn. Also, most educational apps target rote skills, such as ABCs and shapes. These skills are only one part of school readiness. The skills young children need to learn for success in school (and life) such as impulse control, managing emotions, and creative, flexible thinking, are best learned through unstructured and social play with family and friends in the real world.

Digital books (“eBooks”) that have lots of sound and visual effects can sometimes distract children, who then “miss the story” and don’t learn as well as they would from a print book.

If you plan to read e-books to your children:

Why Limit Media Use?
Overuse of digital media may place your child at risk of:

Other Tips for Parents, Families, and Caregivers

The related recommendations below on cell phone use were issued by the same American Academy of Pediatrics, yet appear to be receiving much less media attention.  American Academy of Pediatrics Issues New Recommendations to “Reduce Exposure to Cell Phones”: Nation’s largest group of children’s doctors responds to new government study linking cell phone radiation to cancer.

“They’re not toys. They have radiation that is emitted from them and the more we can keep it off the body and use (the phone) in other ways, it will be safer,” said Jennifer A. Lowry, M.D., FAACT, FAAP, chair of the AAP Council on Environmental Health Executive Committee in the AAPs press release on the NTP Study Results.

“The findings of brain tumors (gliomas) and malignant schwann cell tumors of the heart in the NTP study, as well as DNA damage in brain cells, present a major public health concern because these occurred in the same types of cells that have been reported to develop into tumors in epidemiological studies of adult cell phone users,” stated Ronald L. Melnick, PhD, the National Institutes of Health toxicologist who lead the NTP study design and senior advisor to the Environmental Health Trust. “For children the cancer risks may be greater than that for adults because of greater penetration and absorption of cell phone radiation in the brains of children and because the developing nervous system of children is more susceptible to tissue-damaging agents. Based on this new information, regulatory agencies need to make strong recommendations for consumers to take precautionary measures and avoid close contact with their cell phones, and especially limit or avoid use of cell phones by children.”

The AAP has updated their Healthy Children Webpage on Cell Phones entitled Cell Phone Radiation & Children’s Health: What Parents Need to Know. The webpage reiterated children’s unique vulnerability to cell phone radiation stating, “Another problem is that the cell phone radiation test used by the FCC is based on the devices’ possible effect on large adults—not children. Children’s skulls are thinner and can absorb more radiation.”

Even though the cell phone manual contains specific instructions that say do not carry the phone next to the body, the US government does not publicize this information nor mandate companies inform the public, leaving most people unaware of potential hazards, unwittingly allowing their young children to play with them like toys,” stated Devra Davis MPH, PhD, president of the Environmental Health Trust pointing to the Berkeley Cell Phone Right To Know Ordinance being challenged in court this month.

In 2012, the AAP published Pediatric Environmental Health, 3rd Edition recommending, “exposures can be reduced by encouraging children to use text messaging when possible, make only short and essential calls on cellular phones, use hands free kits and wired headsets and maintain the cellular phone an inch or more away from the head.”

Since 2012, the AAP has supported the Federal Cell Phone Right to Know Legislation and has written letters to the FCC calling on the federal government to review and strengthen radiation standards for wireless devices in an effort to protect children’s health.